Next Step for Youth Ministry Training in Ukraine 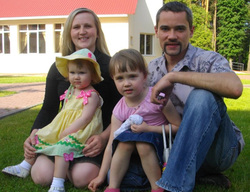 Since 2003, Mike and Judy Manna have taught over 100 youth ministers through our Center for Youth Ministry in Kiev. Thirty students have graduated with their bachelors’ degrees, and many more are currently being trained. One of our star graduates was Vasya Ostriy. Vasya went on to receive a master’s degree in religious studies at a Ukrainian college. He is now training youth ministers on his own credentials at Rivne Bible College and at Kiev Theological Seminary with Mike. He is willing to move his family to Kiev and become a full-time professor and replace Mike as the program director as soon as the funds are available.

Vasya’s father was one of the liquidators of the Chernobyl explosion in Ukraine. Due to the radiation that his father was exposed to, he died in 1998. His death had a very negative affect on Vasya. He began to cover his pain with alcohol and drugs. Four years later, one of his friends brought him to a Christian youth club. Vasya received Christ as his Savior and began living for Him immediately. He became involved in the fastest growing Baptist church in Ukraine (Grace Church of Rivne) and eventually began leading the same youth club in which he met Christ. In 2004, Vasya entered the youth ministry bachelors’ degree program at Kiev Theological Seminary under Mike Manna’s instruction. During his years of study, the youth club under Vasya’s leadership grew to include more than 200 young people.

In 2008, Vasya started a youth ministry certificate program at Rivne Bible College with the partnership of Youth Ministry International.  Several have graduated, and there are currently 15 students in this program. In 2009, after he received his master’s degree, Vasya began teaching two modular courses at Kiev Theological Seminary each year. He is well loved by his students. Vasya is married to Alona and has two daughters, Sophia (5 yrs. old) and Vitalina (2 yrs. old).

Help is Needed to Provide for Vasya

Mike and his family have now moved back to the U.S. to take on the role as Youth Ministry International’s Vice-President. BUT Kiev Theological Seminary needs a full-time Ukrainian youth ministry professor to direct the program after Mike leaves. The seminary is unable to support the position financially at this time. Youth Ministry International, through its National Leadership Support Program, would like to fill this critical training need by providing financial and administrative support for Vasya.

Due to pledges from faith partners, Vasya and his family are now fully supported financially. Mike and Judy have full confidence in Vasya. He is committed to the Lord and to ministering to the young people of Ukraine. He is a very gifted teacher, and the students at KTS look to him as a trusted mentor. Please consider supporting Vasya Ostriy so that we can go to the next level of training youth ministers in Ukraine! Contact Mike at kievmanna@yahoo.com for more information.